You will all have seen or read about Typhoon Koppu in the news, so I thought I would post about our experience of the typhoon here on Boracay and share some of the photos and videos we took. As Koppu begun to make itself known on Boracay, Whitebeach, the main beach on the island darkened and the wind speed increased. 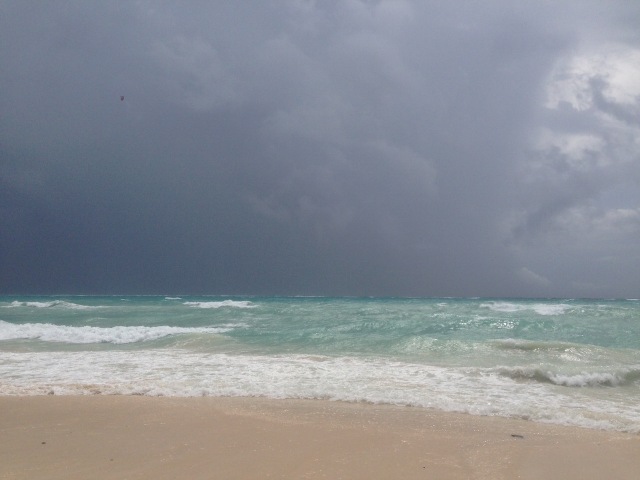 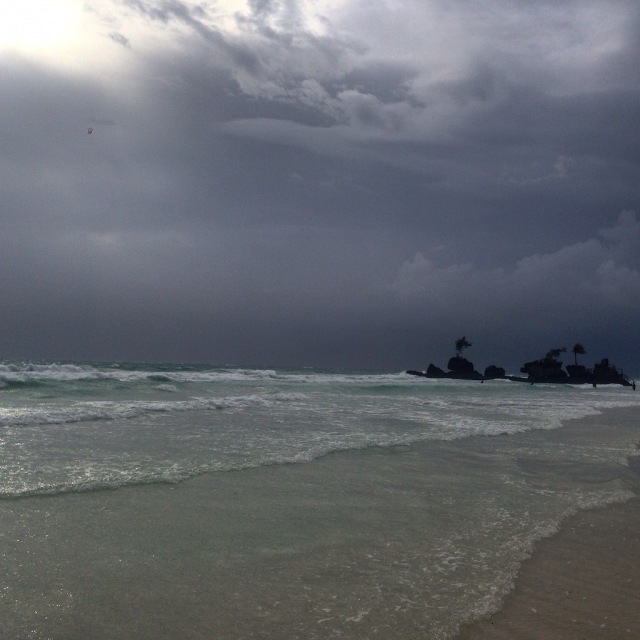 The high winds and waves did make good kite surfing weather though. This side of the island is usually the quieter one, but not when a typhoon raises it head! We did manage to squeeze in a dive on Saturday so now I only have 2 dives until I have completed my Open Water PADI. Even though the boat out to our dive spot involved a lot of rain and wind, once you were beneath the surface of the water you wouldn’t have known it wasn’t a beautiful day outside. 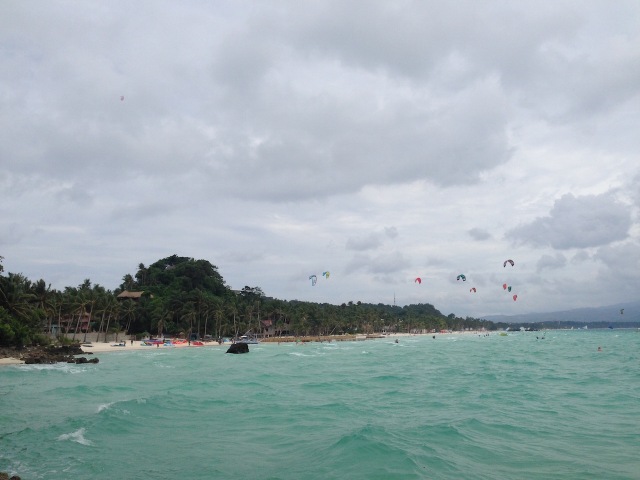 By Saturday night, the rain fell hard, the wind blew and lightening danced in the sky for much of the evening.

By Sunday, the power was off more often than it was on. Because of this, in a momentary break in the rain, we went down to the beach and into a hotel where we knew they had a generator.

A view from higher up…

After a distinctly average lunch, which was actually quite expensive by Boracay standards, we went back to the powerless apartment. All there was to do was chat and nap so that’s what we did.

By late evening we were hungry again and as the rain had stopped and we had heard a generator was running D – Mall in town, we headed there. The flooding on our street was over a foot high and all the villagers huts and street front shops were lit by candles. Thank god for our terrifically sexy head torches.

We arrived with wet, dirty feet and head torch imprints on our foreheads. We met a friend and went to a Greek restaurant, where we ate gyros. Mine was supposed to be chicken but it did not taste like chicken. God only know what it was. Never the less, with our bellies satisfied, we went back to the apartment. The power was now back on and the wind was dying down.

Or at least I thought it was.

Yesterday (Tuesday), diving on the island was still forbidden due to the effects of the typhoon. Maccie and I did get a chance to head down to the beach for a coconut but it still looked rather battered and bruised with lots of washed up stuff on the white sand and unfriendly looking waves.

As reported in the news, Koppu is lingering. It’s a slow-moving typhoon. It’s Wednesday, 3.5 days after the typhoon began, and as I write this the rain is falling hard and the wind is still blowing furiously. Maybe I should have packed an umbrella?

Boracay is located quite far south of where the main effects of Koppu have been felt but still the weather has been intense. Its been exciting, and at times frustrating, to witness the power of mother nature in action but we were lucky in knowing that we would only really get a taster of what a typhoon was like.

However, our thoughts go to the farming communities around Luzon who, from what I have read, have been worst affected by Koppu. The Philippine agriculture sector has suffered over 120 million dollars worth of damage in the last 4 days. Thank goodness the typhoon in 2013, that caused over 7,000 deaths, has prompted this country to be more aware and more ready for such typhoons, probably saving many lives on this occasion. This is the 12th typhoon of 2015 and on average the Philippines are now experiencing around 20 a year.

A typhoon comes and goes. The news reports come and go… but the damage this typhoon has caused will take so long to repair.  A few of the pictures which have stuck in my mind…

Despite the weather, diving is back on today which will lift everyones spirits but I think I will wait until the weekend, when the sea will have settled and the sun might be out to greet us again.

There was an error retrieving images from Instagram. An attempt will be remade in a few minutes.