Isla Del Sol was certainly one of my highlights of our trip through Bolivia. 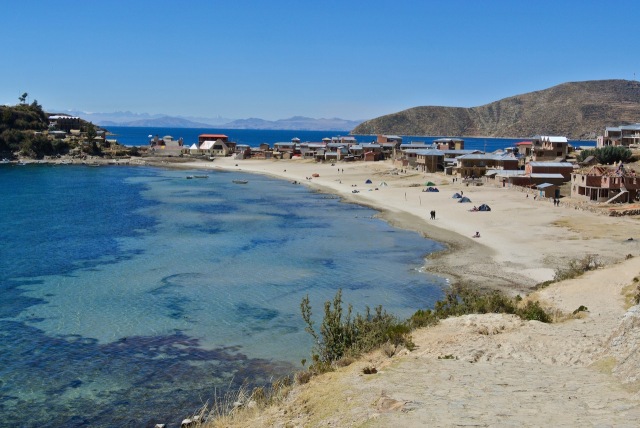 The ‘Island Of The Sun’ is a 70 sq km island on Lake Titicaca, very close to the Peruvian border. This unique, quirky and traditional place is accessible only via boat from Copacabana and once you’re on the island, it’s walking only as there are no roads, or vehicles. The island is inhabited by a mix of indigenous people and more recent settlers.

We travelled from La Paz to Isla Del Sol staying just one night in Copacabana before travelling over the the island. Copacabanas’ main avenue offers all the same items you will have seen all over Bolivia and Peru and vendors constantly bother you to buy bus / boat tickets, which I found rather irritating, so I wouldn’t recommend staying more than one night.

The next morning we hoped on the boat for the slow 2.5 hour journey to the north of the island.

As we cruised into the ‘harbour’, local children gathered to collect the small entrance fee and gaze at all the new gringo faces embarking on their island.

Although there are cheap hostels on the island for around 20Bs a night, you can camp on the beautiful beach for free.

I thought Isla Del Sol would be more busy, but there were only around 5 tents on the beach and a handful of travellers staying in hostels, a lovely surprise.

We soon realised we were pitched next to an Aussie couple who we recognised from Sucre, a town we had visited a month earlier. After chatting to them and meeting some other peeps, we headed up to a cliff top to watch the sunset. We went armed with a bottle of wine and salami, Bre and Matt bought their Ipad for music and others bought beer and Pringles. We were ready for a sunset picnic! 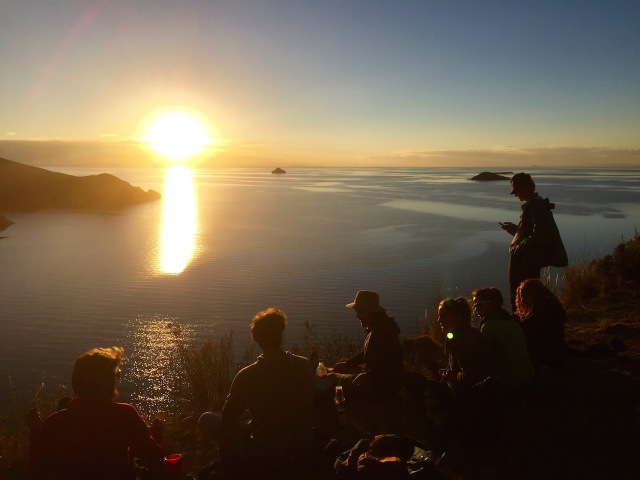 We stayed up late, chatting and sharing stories, one of my favourite past times.

Our initial plan was to hike from the North to the South of the island, but we had heard the south was no where near as nice and we were having too much of a great time in the north to warrant packing up the tent and all our things to trek to the south.

We decided to go on a short hike to the Chincana Ruins, the most notable on the island.

After a few hours, we hiked back, Rocky in toe.

On the second night we decided to make a fire. We bought a small batch of logs from a local lady on the way back from the beach and figured we would find some more around where we had planned to make the fire. We were wrong. Turns out you really can’t find much wood on the island, which probably explains why the wood was reasonably expensive. However, you know how much boys love to make and tend to fires, so we made one anyway. 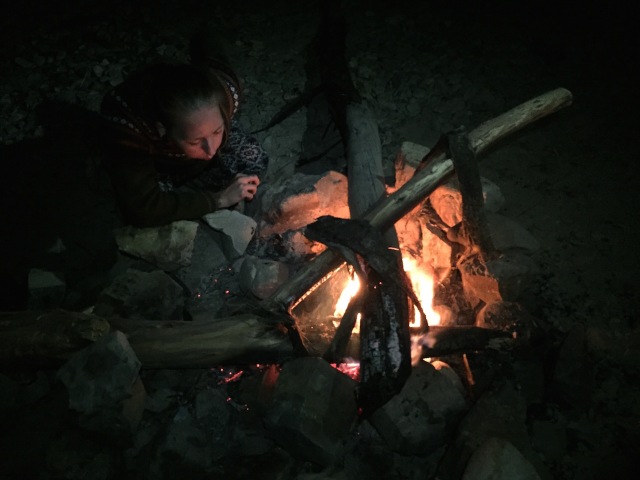 The fire was a success although the constant fire management was relentless! Even with copious layers of clothing and the fire, we were still cold, but had a great time chatting and drinking cheap, slightly corked, red wine.

We adored Isla Del Sol, it’s a charming unmissable place for anyone travelling through Bolivia. I love the ethos the island promotes and whilst the residents are not the friendliest bunch, they really care about their home and encourage you to pick up litter and only have camp fires in a designated spot amongst other things. Children run around, a lamb under each arm, cattle bound down to the lake to drink and cool off and donkeys bray to one another and bask in the sun.